I hadn't been to Western Europe in a long time so I decided to treat myself as a reward for surviving the sale of my house.  I also had a half price mileage ticket from Lufthansa but "half price" meant that I had to choose from a short list of destinations.  I chose the place with the best weather in March and April and headed to Sicily's "second" city - Catania.

According to Lonely Planet, Catania has a "strong magnetic pull" but I never felt it.  It was a decent place to get over jet lag and a great place to start sampling the food.  I managed an arancini (rice ball stuffed with cheese) and a cannoli on my first night and I really never stopped eating until I got back to Milwaukee.

I visited the major tourist attractions during my one full day in Catania and headed to Syracuse.  I stayed in a really nice hotel (free wine!) in Ortigia, the old part of the city.  The two full days I spent there were not enough -  churches, piazzas, fresh tuna with pasta, a fantastic market, fountains, a beautiful seafront and a wonderful Caravaggio painting located inside a church - all amazing. I also visited what is described as the oldest mikvah (Jewish ritual bath) in Europe.  It is located underground and was found by accident when an old residence was being converted into a hotel.  I wasn't allowed to take pictures but there are pictures and more information here: https://www.algila.it/en/syracuse-and-surrounding/ortigia/mikva-ritual-jewish-bath-/33/

Next stop was Modica, one of the three main cities located in the Noto Valley.  I chose it over the other two because of its location and reputation for amazing chocolate and gelato.  My two nights were spent in the upper town in a converted palazzo (the owner still occupies part of the first floor) and I splurged for a meal at the hotel's gourmet restaurant.  More churches, piazzas, and fountains.

After sampling and buying chocolate, and eating the best gelato I have ever tasted at Cafe Adamo https://www.caffeadamo.it/, I headed to Piazza Armerina and the nearby Villa Romana del Casale, known for its beautiful mosaics.  The piazza was built as a country home possibly for one of Rome's emperors and the mosaics were stunning.  I had not planned to include this stop on my trip but it turned out to be one of the highlights.  It is possible to visit the Villa on a day trip from almost anywhere in Sicily but I decided to spend two nights.  Piazza Armerina was a great place to wander around and it has some excellent museums, most of which are free.

Some of the floor mosaics of Villa Romana del Casale.  I like the bloody ones the best but the "bikini girls" are the most popular. 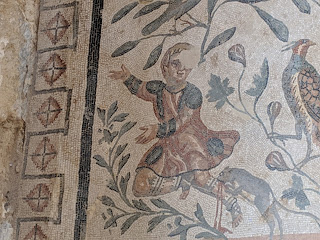 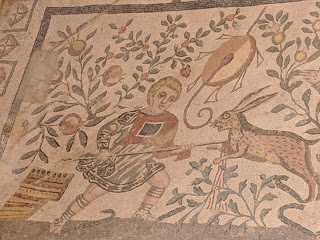 My next to the last stop was Palermo, primarily so I could visit the Cattedral di Monreale and the Palatine Chapel.  Both places are known for their gold and black mosaics and were absolutely breath-taking. 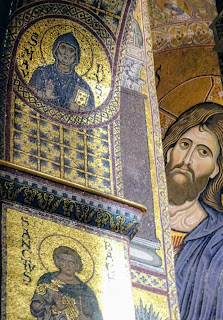 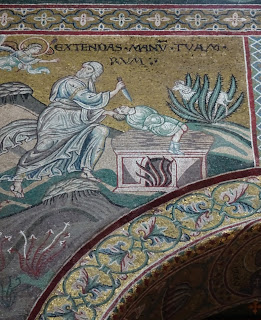 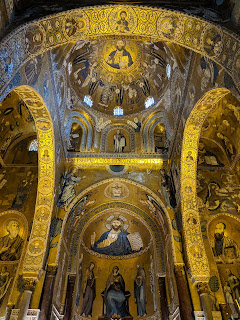 I loved Palermo but I spent way too much time running around and visiting places I could have easily skipped.  One place I was glad I visited was the Inquisition Museum, located in the former prison.  The only things remaining are the cells and graffiti made by the prisoners using blood and urine.  The graffiti was plastered over when the building was converted into offices but it was discovered in 1906 (restoration did not begin until 2005). 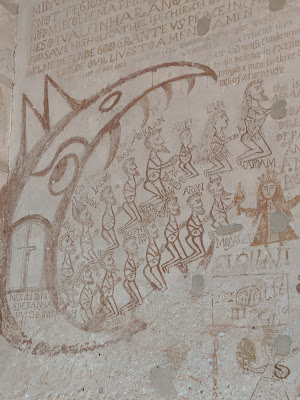 My last three days were spent in Aci Trezza where I did nothing but walk, read and stare at the Ionian Sea.  A perfect way to end a very busy trip.